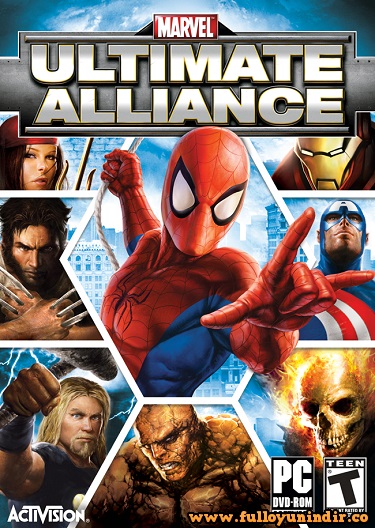 I wasn’t going to do this review. I told myself that I shouldn’t do a video game storyline review for the first real article of my new blog home. But eventually I realized that this is a great way to introduce new fans to the sort of content that interests me. Honestly, when it comes to my own entertainment I’m more of a gamer than a reader, and I enjoy analyzing the storylines that I encounter while gaming. Besides, I like to think that I’m covering some ground that most other video game reviewers miss by focusing on the storyline rather than the mechanics in a game. That being said, let’s take a look at one of my favorite action RPGs, Marvel: Ultimate Alliance.

Dr. Doom has gathered some of the world’s most powerful super-villains in an attempt to (what else?) rule the world. To combat these Masters of Evil, Nick Fury and SHIELD have assembled earth’s mightiest heroes to help. The battle rages across a variety of locations, including the SHIELD helicarrier, Mephisto’s realm, Atlantis, Asgard, and the Skrull home-world. Will the heroes win, or will Doom succeed in his nefarious quest?

The first thing you need to know about this game is that it doesn’t take place in the Marvel Cinematic Universe. The game was released in 2006, just two years before Robert Downey Jr.’s Iron Man changed the face of superhero movies. As a result, the characters in this game are perhaps some of the last iterations that are faithful adaptations of the comics with no influences from the movies. Which isn’t necessarily a good thing.

Tony Stark is bland. Captain America is a humorless hard-nose. Loki is a prancing  doofus. Only Deadpool has any character at all, and even he is going to seem very mild to people expecting to see something closer to Ryan Reynolds’ signature style. Even worse, most of the dialogue in the game is written from a generic POV. Aside from a few comical mini-scenes and Easter eggs, nearly all of the dialogue is either droning exposition or hokey melodrama regardless of who is talking.

The plot isn’t much better. Dr. Doom’s plan is a convoluted mess, forcing your characters to go on a massive scavenger hunt from one random location to another. While this allows for some interesting set pieces, mostly it just feels like a lame excuse to showcase every marvel character that isn’t in the X-men or Spider-man franchises.

Those of you who remember my reactions to the storyline in Diablo 3 may think that I’m being too harsh on Ultimate Alliance. After all, this is an action RPG. The story doesn’t really matter, does it? Actually, it does. The reason why Diablo 3 worked was because it dropped the player into the midst of a vibrant, deadly world with little explanation beyond “Demons are killing people. Go do something about it!” The mistake Ultimate Alliance makes it over-explaining everything. Every hero (and there are around 20 of them) get multiple dialogues describing their origins, powers, and their bland reactions to the plot. Every villain gives a monologue about why they are superior to you before you battle them, and there are a lot of minor villains to go through. In short, the story in an action RPG is effective when it’s minimal, while Ultimate Alliance has ten-minute stretches of tedious dialogue every half-hour.

All of that being said, I would still recommend this game to superhero fans, especially those of you who are feeling nostalgic for Marvel before the MCU took over movie theaters around the world. Despite a few too many quick-time event boss fights, the game mechanics are overall very good and reflect the unique powers of each character well. But unless you’ve somehow never heard of Spider-man or Wolverine, don’t bother listening to their dialogue, as they have nothing interesting to say.