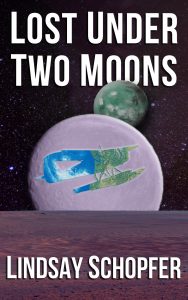 First, some history. When I turned nineteen, I put all of my other life-plans on hold and went to the Navajo Reservation in New Mexico to serve a two-year mission for the Church of Jesus Christ of Latter-Day Saints. It was during this exciting, frightening, and often lonely time that I became a dedicated journal-writer. Every day I faithfully recorded the major events of the day, along with many emotions which often had no other outlet. Whenever I felt feeling alone or isolated in a familiar yet foreign environment, I gained a deep appreciation for the process of recording my thoughts and writing through my difficulties.

I didn’t think of any of this consciously when I started the first real draft of Lost Under Two Moons. I was simply trying out an experiment on a project that had failed to ever get past the first page or so of an attempt. I chose an empty, heavy-duty spiral notebook and began writing entries as if I were stranded on an alien world. Nearly two years later, I had the entire first draft contained in that now ratty, war-torn notebook. I still have it.

There were some unique challenges that came with the journal format, but the biggest problem was how to handle physical danger. After all, what tension could there be if we knew that the protagonist not only survived the latest adventure but was apparently healthy enough to write a detailed entry in his journal about it? My solution was to draw from my experiences on my mission. While I was rarely in real physical danger on the reservation, the extremes of stress and emotion meant that some of my entries were erratic, scattered, and even cryptically fragmented. This gave me the idea that while Richard might still be able to write about his day, we don’t know what condition he is in while he’s writing. I could also use the way that he wrote to add tension and tell more than perhaps even he realized he was saying. The ending result proved to be very visceral and surprisingly personal for me.

Would I use the format again if I were to write the book over? Absolutely. It’s the only way I could tell this story. Richard’s adventure is as much one of the heart as it is of the body, and while the process was much harder than a regular narrative would have been, I think that the worth of it is clear to open-hearted readers.